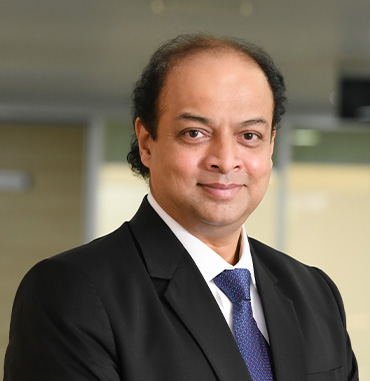 Shreehas Tambe is the Chief Executive Officer and Managing Director of Biocon Biologics.

A Biocon veteran, Shreehas has a demonstrated track record of business success, as well as deep technical and operational expertise. He has effectively built and led large, diverse, cross-functional teams and has championed the company’s focus on internal talent development.

Prior to becoming the CEO & MD, Shreehas was the Deputy CEO of Biocon Biologics and played an important and very effective role in steering the company towards sustainable growth and laying a strong foundation for the future. He also had an integral role in Biocon Biologics’ historic acquisition of Viatris’ global biosimilars business and the strategic alliance with Serum Institute Life Sciences (SILS), which will drive BBL’s future growth and create long-term value for all its stakeholders.

Shreehas has been with Biocon since 1997 and has held diverse leadership and operational roles. Over the past 25 years, he has helped build and shape Biocon’s biosimilars business and spearheaded the Group’s strategic capital investments, including its first overseas facility in Malaysia. He has also been instrumental in securing regulatory approvals and enabling the successful launch of several of the Company’s biosimilar assets in global markets such as the U.S. and EU.

As the Senior Vice President & Global Head of Biocon’s Insulins business unit he was responsible for the P&L and expanding the Insulins portfolio across several geographies. He led the development, approval and launch of Insulin analogs in Japan and later in EU and U.S. With Shreehas at the helm, the insulins franchise showed strong performance in emerging markets led by sales in Malaysia, Mexico and other Latin American countries.

It was under Shreehas’ leadership that Biocon made its first overseas investment in R&D and Manufacturing in 2015, building Asia’s largest integrated insulins complex in Malaysia, which is approved by the U.S. FDA and EMA among other regulatory agencies. Shreehas was the Global Head of Projects & Engineering when he led the multi-million dollar investment in Malaysia, managing and providing strategic direction to the investment.

Shreehas began his professional journey at Biocon as a Management Trainee, starting out in the R&D department where he led the design and development of a novel bioreactor, the PlaFractor™, a unique solid-state bioreactor that got Biocon its first U.S. patent and went on to win the National Award for the Best Technology of the Year in 2001.

Shreehas holds a Masters’ degree in Bioprocess Technology from ICT (UDCT), University of Mumbai and has also studied Pharmaceutical Sciences & Technology at the University of Pune. He was conferred the coveted Distinguished Alumnus Award (Professional) by his alma mater, the prestigious ICT, Mumbai, in 2020.